Breaking the Silence: How to find your way 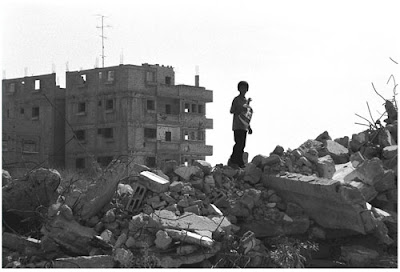 You go into Al Atatra, and you see buildings, houses?
Ruins. I entered Al Atatra after seeing aerial photos and didn't identify anything,and my photographic memory is not that bad. I remembered that 200 meters further on down the track there should be a junction, with two large houses at the corners, and there wasn't. I remembered there was supposed to be a square with a Hamas memorial monument, and there wasn't. There was rubble, broken blocks.
How did the destruction affect your ability to communicate, to navigate?
It got to the point where we would try to report to field intelligence about a figure
sticking out its head or a rocket being launched, and the girl (at field intelligence) would ask,"Is it near this or that house"? We'd look at the aerial photo and say, "Yes, but the house is no longer there." "Wait, is it facing a square?" "No more square." She would ask us if this was the third or fourth junction, and we'd tell her the houses are all crushed over the junction and you don't see a single junction. It got to the point where we could hardly see our way. Later I went in to the lookout war-room and asked how things worked, and the girl-soldiers there, the lookouts, resented the fact that they had no way to direct the planes, because all of their reference points were razed. So they would direct them in general terms or rely solely on coordinates. They found their reference points on aerial photos shared by the pilots and the war-room, and very approximate, which also annoys me. What is this, approximation? It's highly possible that now the pilot will bomb the wrong house.
Were you told of this approximation, or is this your own take on things?
It was my own take on things. She tells him, "Take some 800 meters east of the sea and so and so meters at such and such an azimuth from this or that line," and you say, "Wait, if he does not use the compass and other instruments in his cockpit for these measurements, then possibly he'll miss targets, it's not so farfetched. This is not the 'smart bomb' we had been working on so hard. Could be he's using such a bomb, but aiming at the wrong target."
op juli 29, 2009 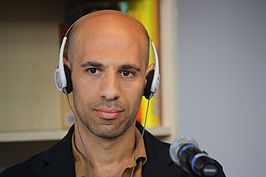