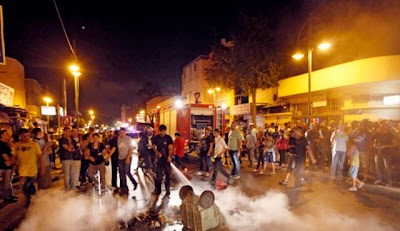 Some 1,000 protesters rallied in Tel Aviv's Hatikva neighborhood on Wednesday and called for the ousting of African asylum seekers from Israel.
Demonstrators attacked African passersby while others lit garbage cans on fire and smashed car windows. Another group of demonstrators stopped a shuttle taxi and searched for migrant workers among the passengers, while banging on the windows.
The crowd cried "The people want the Sudanese deported" and "Infiltrators get out of our home."
Some people carried signs in support of Interior Minister Eli Yishai, who called for the detention and expulsion of all asylum seekers earlier this week.

Several protesters smashed the windows of a grocery store that served the migrant workers community, broke the windows of a barber shop and looted it. Police arrested 17 people during the protest, with some of them detained an hour after they beat Sudanese migrants.

A number of Knesset members from the ruling Likud party were also on hand. MK Danny Danon (Likud), chairman of the “Deportation Now” movement, called for the immediate expulsion of African migrants from Israel. Danon said: “The infiltrators are a national plague and we must deport them immediately before it’s too late – the Sudanese can go back to Sudan and the rest should be deported to other countries in Africa and Eastern Europe.”


MK Miri Regev referred to the infiltrators as a "cancer" and attacked the human rights groups that are aiding the foreign migrant
MK Michael Ben Ari (National Union) was also present, together with the settler Baruch Marzel. He promised the inhabitants of the south Tel Aviv neigbourhoods that they will soon be able to take courses in krav maga, tae kwan do, and tai chi, by way of self-defense.
In the meantime the government is preparing a mass deportation of refugees to South Sudan. Attorney General Yehuda Weinstein next week will argue before the Jerusalem District Court that there is no legal obstacle to the expulsions.
op mei 24, 2012