Israel demolishes houses in the Negev 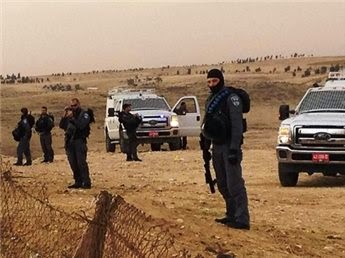 Israeli forces demolished homes in the Negev village of Al-Zaarura on Wednesday morning, just one of dozens of Palestinian villages in the Negev which is unrecognized by Israeli authorities. Locals told Ma'an that bulldozers demolished houses belonging to the al-Farawnah family.
Israel refuses to recognize more than 35 Bedouin villages in the Negev, which collectively house nearly 90,000 people. Many of the villages were constructed before 1966 at a time when Bedouins were concentrated on reserves by the state and ruled under martial law, as were all Palestinian citizens of Israel.
According to the Israel Land Authority, 11 buildings were demolished in the Negev last week due to lack of construction permits.
Posted by Abu Pessoptimist at 10:00