Yesh Din: Israeli police fail to follow up on 92% of complaints about settler abuse against Palestinians 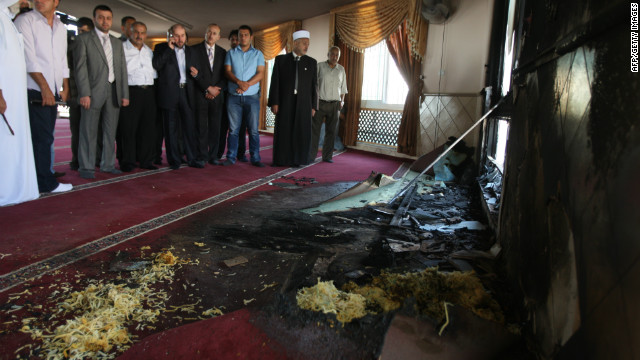 Mosque partially burned by settlers in Jaba'a, in June 2012. (Jews for Justice for Palestinians)

Some 92 percent of complaints filed by Palestinians are closed and the criminal never found, according to a report by the Yesh Din human rights group, which has been tracking 1,045 complaints filed through the organization since 2005.
The list of complaints includes shooting attacks, assault,stone-throwing, arson, cutting down trees, animal abuse, crop theft, construction on Palestinian-owned land, threats and attacks. All the actions mentioned in the complaints were committed by Israeli citizens.
The statistics from 2013 and 2014 have led Yesh Din officials to conclude that the establishment of the new department set up the Judea and Samaria District Police to combat nationalistically-motivated crime has led to no improvement in the investigations. Yesh Din officials say that the percentage of failures of the Israel Police to investigate ideologically-motivated crime against Palestinians has only increased.

Olive trees near the village of Jalud, burned by settlers.

he investigative authorities have completed handling 106 of the 159 cases that Yesh Din is currently tracking. Indictments were served against the suspects in only two of the cases (1.9 percent). In comparison, 86 cases were closed on the grounds of “criminal unknown,” seven were closed “for lack of sufficient evidence,” and two others were closed on the grounds that “no felony was committed.” Yesh Din officials appealed the closure of nine of these cases.
These statistics mean that of the 106 cases in which investigations were completed, 89.6 percent were closed under circumstances that testify to a failure in the investigative process.
“The statistics prove that the high-flown statements about the fight against nationalistically-motivated crime were hollow,” says Noa Cohen, data coordinator at Yesh Din’s research department. “The new department has not improved by one iota the law-enforcement authorities’ ability to investigate and prosecute criminals suspected of harming Palestinians, and ideologically-motivated crime in the West Bank continues to serve as a tool of intimidation and the takeover of land.”
A spokesman for the Judea and Samaria District Police commented, “The Israel Police has not yet received the report, so no comment about the data can be made.”
Posted by Abu Pessoptimist at 08:52