Sad news. Haaretz today announced the death of veteran journalist Amos Elon (84) in the village in Tuscany, Italy, where he has been living for the past 20 years. Elon was one of the most outstanding Israeli journalists, a man who wrote as easily for publications like the New York Review of Books, an example for many.
He was born in 1925 in Vienna and fled with his family to Palestine in 1933, where he in the fifties became the star of Haaretz and a protege of Gershom Shocken, the owner and editor in chief. He was subsequently sent to Europe and the States as a correspondent.
In 1970 Elon published the book 'The Israeli's' which was an immediate succes. He thereupon left Haaretz, but returned in 1978 in the wake of the peace process with Egypt. In 1986 he left the paper for good and went to live in his wife's house in Tuscany. There he wrote a biography of Herzl, a book about the Rothschilds and 'The Pity of it All: A portrait of the German Jewish Epoch 1743-1933'.
In 2000 I reviewed for the Dutch Jewish weekly Het Nieuw Israelietisch Weekblad 'A Blood Dimmed Tide' a collection of dispatches he wrote for Haaretz and other newspapers over a period of some 30 years,(the review is to be found on this blog under the tag Amos Elon). Elon has often been described as a cultured, reserved and very intellectual person. A similar picture emerged from this collection of stories. Well written, sensitive, mostly pessimistic and critical observations about developments and trends in Israel. The thirst for territory after the victory of 1967, the sad aftermath of the 1982 invasion of Lebanon, the strange preoccupation with archeology (Dayan, Yigal Yadin), or the way the right started to use the narrative of the holocaust to justify tough actions against real or presumed enemies. 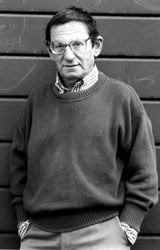 Nowadays Elon strats to be forgotten. But in 2004 he was , in spite of that, at length interviewed in Haartexz by Ari Shavit (also published by Counterpunch, here). There he admitted te be disappointed by the devolopmenets in Israel: 'Nothing has changed here in the last 40 years. The problems are exactly the same as they always were. The solutions were already known back then. But no one paid attention to them. And I found myself repeating them. I found myself saying the same thing all the time. And I started to bore myself.'
He said te feel alienated because of the 'sharp shift in Israel toward the right and toward religion' and the occupation after 1967 'that corrupted Israeli society. Quote: 'There were two sources of perversion: the mixture of religion with political policy and the secular right's military adventurism. Force. The worship of force. By the way, it hasn't come only from the Likud. It also came from Ahdut Ha'avoda (the United Workers Party, a precursor of the Labor Party), from people like Allon and Gallili. Ahdut Ha'avoda always seemed to me to be a party of farmers fighting over each piece of land with pitchforks.'
And about zionism and the state: 'I think that Zionism has exhausted itself. Precisely because it accomplished its aims. If the Zionism of today isn't a success story, it's the fault of the Zionists. It's because of the religionization and Likudization of Zionism and because of what was supposed to be a state-of-the-Jews has become a Jewish state.'
Words that deserve to be remembered. Together with the man who spoke them.
Posted by Abu Pessoptimist at 22:31