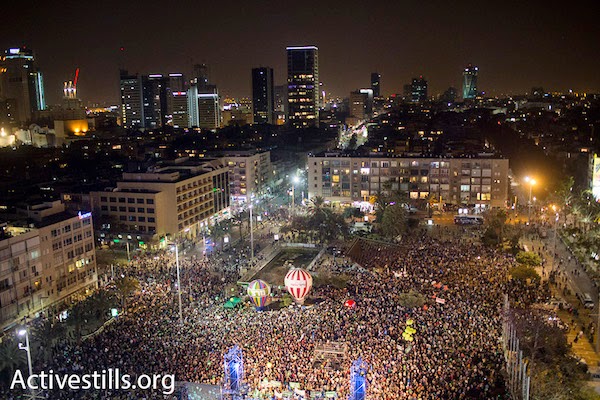 I shameslessly copy here an article by Michael Schaeffer Omer-Man on magazine +972. Because I don't have time to write spmething like this myself, and because I completely agree with him:
Out of Some 50,000 people showed up on Saturday at a rally demanding change: a change in government, a change in attitude toward the Palestinian issue, a change in the state’s approach to social issues.
The main theme in most of the speeches at Saturday night’s rally in Rabin Square was Prime Minister Benjamin Netanyahu’s lack of strategic vision on the Palestinian issue, and the need to reach an agreement to end the occupation and the conflict. Two former senior security officials, ex-Mossad chief Meir Dagan and Maj.-Gen. (ret.) Amiram Levine, both warned that Israel is heading toward a reality of apartheid if it continues its 47-year-old regime of military rule over 4 million Palestinians.
But if those 50,000 people truly wanted change, if they wanted to unequivocally demonstrate that the occupation must end, then they showed up at the wrong rally.
Earlier that day in Jerusalem, some 1,500 Israeli and Palestinian women marched toward both sides of the Qalandia checkpoint — that separates Jerusalem and Ramallah — with more articulate demands for change: an end to the occupation. 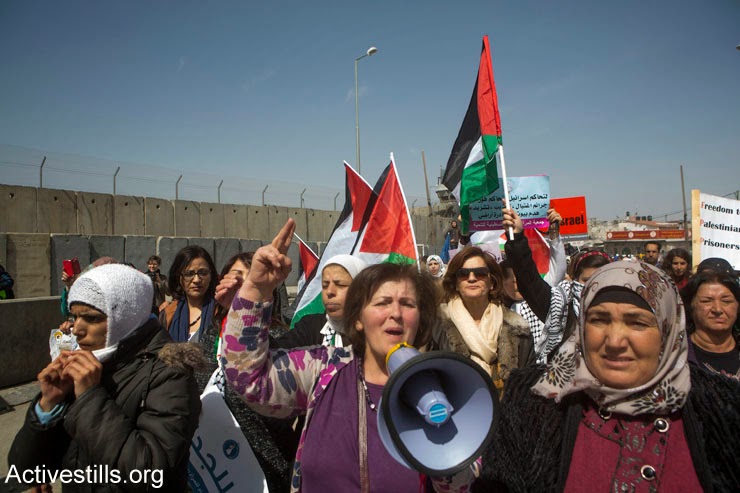 Palestinian women marched toward the Qalandia checkpoint separating Ramallah and Jerusalem one day before Internatioanl women;'s day. Isareli troops broke up the march. Tens of women had to be treated for breathing difficulties becuas of having been exposed to high concenrtations of teargas.

Imagine if 50,000 Israelis marched on Qalandia to demand an end to Israel’s undemocratic military rule over Palestinians, an end to the checkpoints that restrict Palestinian freedom of movement while allowing Israelis to drive through unhindered, an end to separate laws and permit regimes that do indeed bring up images of South African apartheid.
Fot the rest of his artcile go to +972
op maart 08, 2015