Talking to Israelis is so useless

Being part of the lefty ultra-minority in Israel – and obsessed with politics at the same time – I get mixed up regularly in political debates (fights?) with friends, family members, coworkers, writers and readers of pro-Israeli blogs, and basically, whoever is around. But lately, I have to admit, I’m getting tired of this habit. I feel that no matter what the issue at hand is, Israelis and their supporters fall back to the same argument:
The Palestinians want to destroy us, and therefore, whatever we do to them is justified.
It doesn’t matter that A doesn’t necessarily leads to B (even in war not everything is justified), it doesn’t even matter we are talking about something else completely, say racism towards Arab Israeli citizens or the future of Jerusalem. Whatever I say, wherever we go, we end up at the same station. The Palestinians want to destroy us, and therefore, whatever we do to them is justified.
I try to speak about Gaza, and say, the illegal use of phosphorus bombs against civilians.
“How do you know the IDF did that?” the answer comes. “Don’t say you believe that self-hating Jew, Goldstone?”
-    Well, there are pictures of the bombs exploding, there are people with phosphorus-like burns, and I know that every combat unit in the IDF carries standard phosphorus ammunition, because I’ve been there and I even used it in training. 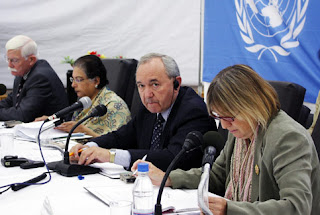 -    You don’t get it, do you? The Palestinians want to destroy us all. What we did in Gaza was self-defense, like everyone else would have done. We didn’t want to kill those children. We did what’s necessary. It was justified.

And that’s basically it. You can’t ask about war crimes, you can’t discuss the phosphorus. Everything becomes irrelevant.
So I forget about the Goldstone report, just like the Israeli media did, and I try to write about Obama’s effort to re-ignite the peace process, or about the fact that from an Israeli perspective, there is no real alternative to the two-state solution. I ask, for example, why Israel can’t stop building settlements, even for a limited time.
-    Because settlements are not the issue. They are not the obstacle for peace. We can evacuate them whenever we want.
-    If it’s no big deal, what’s preventing us from stopping, even as a favor to Obama?
-    The whole demand is a trick to divert us, and the rest of the world, from the real issue: that the Palestinians want to destroy us. Therefore, building settlements is justified.
-    I fail to see the connection. The Hamas is indeed a problem, but surly, Abu-Mazen… I mean, look at his efforts to keep the West Bank quiet…
-    If everything is quiet, what’s the rush to hand back land?
-    Because if we don’t, we will have another Intifada.
-    And in this case, we will give them nothing! We don’t deal with terrorists!
-    So, when do we get the point where we do give them something?
-    It’s simple: When they don’t want to destroy us anymore.
-    And how do we know that?
-    We can’t. Look at what happened in Gaza. We withdrew and what did we get in return? The Hamas with its rockets. Imagine us withdrawing from the West Bank, and five years later we get the Hamas there as well, 15 minutes from Tel Aviv! You can never trust the Palestinians. All they want is to destroy us.

And so it goes on and on. The Israelis found the perfect argument. It’s the reason and the outcome of everything. It’s the way to understand the past, behave in the present and foresee the future. It’s the full circle, the ying and the yang, and there is no way to break it, since Israelis seem to know what’s in the Palestinians’ hearts. And this is something you can’t debate.
The only possible solution is to surrender. “OK,” I say. “I’ll go along with your logic. We can’t leave the West Bank, and we can’t deport 2 million Palestinians by force…”
-    No way! This is a democracy!
-    Yeh, I know… and the one-state solution is out of the question…
-    Out of the question! We will have an Arab majority! This will be the end of everything!
-    So what do you basically suggest we do?
(Silence, followed by a long speech)
-    Look. What are you getting at? Are you trying to say we don’t want peace? Don’t you remember the Camp David summit? We offered them almost everything, everything! Not to mention Oslo! And Gaza! And Madrid! It’s not that we don’t want peace! We love peace! It’s the first word in Hebrew! Show me another nation where peace means also Hello!
-    Well, in Arabic…
-    …The point is that we want peace. Do you think we enjoy all these wars? Remember what Golda Meir said? “We will forgive the Arabs for what they did to us, but we will never forgive them for what they made us do to them.” Beautiful, isn’t it? Captures the whole thing… I mean, look at the people we are dealing with. This is no Europe. It’s the Middle East. The Arabs, they never accepted us here. Remember the second Intifada? The first Intifada? Lebanon? Yom Kippur war? Remember the PLO convention in 64′? That was before we took the territories! Do you remember the partition offer in 47′? Why didn’t they take it? Did you know the Gran Moufti supported Hitler? Hitler! Remember the riots in 36′? There wasn’t even a state of Israel back then! And what about the pogroms in 29′? The Tel-Chai incident in 1920?
-    I’m trying to think about the future. This leads us nowhere, the Palestinians have their own list of pogroms, lets take the Nakba for instance…
-    The Nakba? What’s that has to do with it? Why are they always so obsessed with the Nakba, those Palestinians? They should look forward, settle the refugees where they are, build their nation… and you, why do you criticize Israel all the time? Can’t you write about them for a change?
-    Like what?
-    For example, about the incitement in the Palestinian society. They really don’t like us, you know.
-    They want to destroy us.
-    I see you are learning something after all.
op oktober 14, 2009