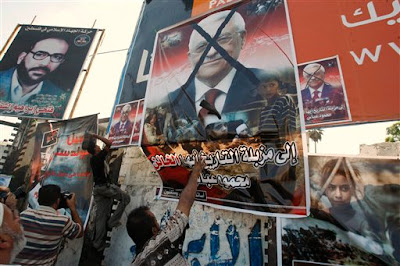 People in Gaza throw shoes at a poster of Abbas. Throwing shoes at someone - or calling him son af a shoe - is a very serious insult in the Arab world.

A delegation of Hamas, under Moussa Abu Marzouq had talks in Egypt and formally asked the Egyptians to postpone the signing of a reconciliation agreement with Fatah, which was planned to take place the 25th of October in Cairo. Hamas does not want to conclude the agreement with this leadership of Fatah, after it postponed the vote about the Goldstone report in de UN Human Rights Council. Hamas-parlementarian Yahya Moussa said that 'the dismissal of that leadership has become not only a Hamas demand, but also a demand by the Palestinian public as well as other Palestinian opposition factions.'
'There are angry sides amongst the Palestinian public who would not accept that Hamas signed agreement with those who are accused of selling martyrs blood through withdrawing the report which was supposed to be submitted to the UN Human Rights Council,' Moussa said. 'Fatah, the PA, and the PLO must amend the situation,' he added, before Hamas can reconcile with them.

And analist Sami Khoury wrote: 'Abbas has failed his people, but he can partially redeem himself and set the stage for his successor to play a more effective role. He should act with honor and confidence by stepping down as PA president, calling a new election to bring in a more legitimate and capable leadership, and focus his energy on where he started his days decades ago when he still had credibility and courage -- by reconstituting the PLO as the coordinating body for all Palestinians,'

Posted by Abu Pessoptimist at 10:17