A Letter to the Israeli People
I am appealing to you as an Israeli citizen:
When your government denied my family our rights in the past, many ordinary Israelis did not look away. Instead, they stood with us. They showed us that Israelis are able to look past our differences and stand up for what is right.
I call on the Israeli people once again to help.
Early on Sunday August 2nd, more than 200 armed police smashed our windows, barged into our house and threw us out. They said we were living in the house illegally because Jews owned the land upon which our homes were built- over a hundred years ago. But, immediately after we were forced out, extremist settlers took over and occupied our home. They are still there now.
My wife, children and I have spent the past seven days and nights in the streets, and there is no end for us in sight. Overnight, we were made homeless. I hope you can help us seek the justice denied to us.
Israel calls itself a democracy. If so, the government is answerable to you, the Israeli people.
My family's situation is not an isolated case. Stories like ours are being played out all the time in Jerusalem and will continue. It is being perpetuated by the government of Israel in your name, in the name of the Israeli people, against UN resolutions and international law.
Please, stand with us again in our time of need, and help my family and I and those like us, to get our homes back.
We need your support. With each new day spent in the streets, our time is running out. Please stop the Israeli government from abusing us in Sheikh Jarrah in your name.
Maher Hannoun,
Sheikh Jarrah,
Jerusalem 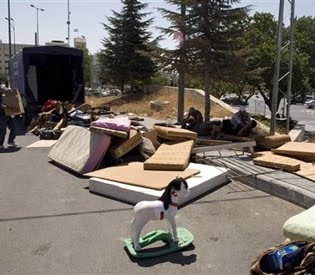 Monday 27 July 2009:
A demonstration will be held outside the Darwish Hijazi home to protest the demolition of the home and the ethnic cleansing of occupied East Jerusalem.
Palestinian residents of Sheikh Jarrah, along with international and Israeli solidarity activists, will hold a demonstration outside the Darwish Hijazi home in Sheikh Jarrah. On Sunday, 26 July 2009, 7 international activists, 1 Israeli activist and 2 Palestinians were arrested outside the Palestinian home.
Settlers had broken into the home and began to destroy the house from the inside. According to local residents, the Palestinian home owner had died a month ago, leaving no one inside the home to protect it. Around 12:30 pm, Israeli forces arrested a German national, an Australian national, a Scottish national, an Israeli and 2 Palestinians including former Minister of Jerusalem Affairs Hatim Abdul Qader, when they tried to block settlers from entering the home. 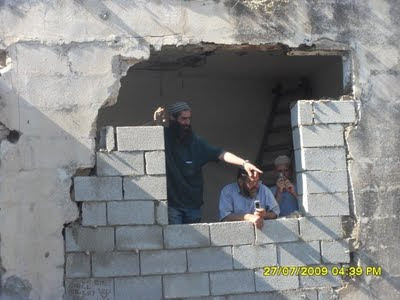 The case of Sheikh Jarrah
The Sheikh Jarrah neighborhood in East Jerusalem was built by the UN and Jordanian government in 1956 to house Palestinian refugees from the 1948 war. However, with the the start of the Israeli occupation of East Jerusalem, following the 1967 war, settlers began claiming ownership of the land the Sheikh Jarrah neighborhood was build on.
Stating that they had purchased the land from a previous Ottoman owner in the 1800s, settlers claimed ownership of the land. In 1972 settlers successfully registered this claim with the Israeli Land Registrar.
The 28 families face eviction from their homes. In November 2008, the al-Kurd family was violently evicted from their home in Sheikh Jarrah. Two weeks thereafter, Mohammad al-Kurd died from a stress induced heart attack.
Currently, the Hannoun and the al-Ghawi families face eviction from their Sheikh Jarrah homes. However, all 28 families are battling eviction in Israeli court.
op augustus 14, 2009 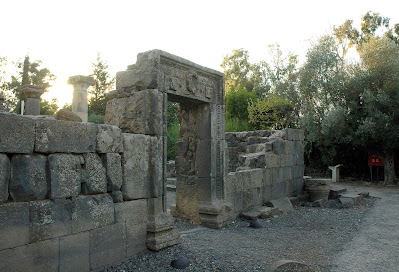