The Palestinan National Council (PNC) has elected six new members of the PLO-Executive during an extraordinary session in Ramallah. Ma'an reported that the six were chosen during talks between the different factions. They are: Saeb Erakat (Fatah, well known from the negotations with Israel), Ahmed Qurei (Fatah, former prime minister), Salih Raafat (FIDA, the Ýasser Abd Rabbo split of the DFLP), Ahmad Majdalani (Palestinian People's Struggle Front PPSF, professor of philosofy at Bir Zeit, he takes the seat of Samir Ghoushe who died earlier this month), Hanna Amira (the communist Palestinian People's Party), and Ziad Abu Amr (former minister of Culture of the PA, former minister of Foreign Affairs in the short lived Haniyyeh government of national unity. He is an independent. 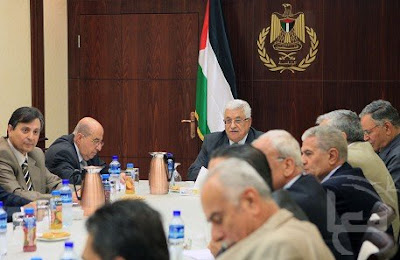 Abbas during talks with leaders of other factions.

The session of the PNC was the first since 1998, which at the time was held at the wishes of Israel that wanted the PLO-Charter to be altered. Mahmoud Abbas, who is president of the PLO, of the PA and of Fatah, called for the present meeting shortly after he had strengthened his position at the recently held congress of Fatah. Of the about 700 PNC-members no more than a 350 were able to attend. The meeting was sharply condemned by the parliamentary faction of Hamas, the Change and Reform bloc. In a statement it said that it - being representative of the Palestinian majority - no longer accepted the notion that the PLO was an umbrella organization of all Palestinian factions. The statement said that the meeting was held in spite of the agreement reached in Cairo in 2005, that stipulated that the PLO would not convene before it  had been reformed, according to reconciliation talks between Hamas and Fatah. The bloc stressed that 'Abbas strives hard to control the PLO, and to find a nominal executive committee of his own making that would pave the way for him to go ahead with his plans that would finish off the Palestinian cause, the right of return, and to accept a demilitarized Palestinian quasi-state without Jerusalem'.

The Electronic Intifada features an article by the Gazan English literature professor and independent political analyst Haidar Eid in which he sharply criticezes the recent Fatah Congress. According to Eid
The sixth congress of the Fatah movement, held in Bethlehem earlier this month, gave us a front row seat to the closing act of an important period of Palestinian nationalism.
True, the conference was held on Palestinian soil, but, ironically, under the watchful eye of Israeli soldiers. The failure of the Palestinian Liberation Movement (Fatah) to achieve any of its declared goals was symbolized in its holding the conference under occupation.

According to Eid that symbolizes ot only the demise of the ideals of the old Fatah but of Palestinian nationalism as a whole.
The opening speech given by Fatah chairman Mahmoud Abbas was approved as the political statement of the conference. The speech itself was the manifestation of what Oslo, Taba, the Road Map and the Annapolis summit aimed at; namely, the transformation of the Palestinian cause from one of self-determination and liberation into a charity case to which the slogan "independence" is applied. Critical appraisal of the last 20 years since the convening of the fifth Fatah congress, or even the period since the disastrous Oslo accords were signed in 1993, was never on the agenda. Questioning the logic of Israel's tolerance of the conference was also a taboo.

Eid's article can be found here.
And here was my own reading of the Fatah Congress
op augustus 27, 2009 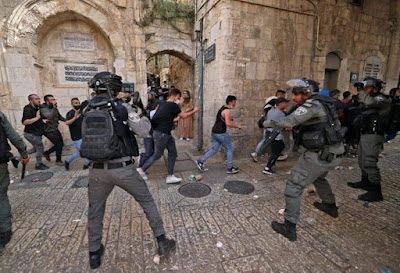