The Israeli minister of communication, Ayoub Kara, made me feel ashamed. He made me feel ashamed as an Israeli, as a journalist, and as a liberal human being. Ayoub Kara wants to put Israel together with Saudi Arabia, Egypt, Bahrain and the Emirates, declaring war on Al Jazeera.
Minister Kara is perceived in Israel as a political joke. He was nominated to his office just when Prime Minister Benjamin Netanyahu had to give it up for legal reasons. Kara became Netanyahu's puppet in the communication ministry. All this does not make his decision to declare war on Al Jazeera less important, or less meaningful. On the contrary, Minister Kara tries to follow not only his master's political attitudes, but also the Israeli national sentiment that any critical voices in Israel and from abroad should be fought.
The declaration of the government's intent to close down Al Jazeera and blocking its broadcast in Israel, might have very little practical consequences. It is not clear if the Israeli government can close Al Jazeera's bureau; if Al Jazeera employees can be prevented from working as journalists; if the governmental press office can revoke their accreditations; and if the government can prevent Israelis from watching Al Jazeera. But those are minor questions. The main issue is the Israeli intention and the Israeli policy, which has a much broader context.
It is the democratic face of the state of Israel and the attempt to curb freedom of speech and freedom of the press in Israel - "the only democracy in the Middle East". This process might start with Al Jazeera but it will never stop there; it will continue with BBC and CNN and it might end with closing down Israeli media outlets the government doesn't favour. And therefore, the Al Jazeera case should worry many more Israelis, Jews and Arabs alike.
What we see are the growing cracks in the Israeli democracy, nothing less than this. It is an extremely dangerous path, in which other governments in the world have walked, which you know where it begins but not where it ends. It is the dangerous path that, for example, Turkish Prime Minister Recep Tayyip Erdogan is walking.
The current government of Israel is the most nationalistic, right-wing government Israel has ever had. Mr Netanyahu has been in office for almost 10 years, but it is only in this current term that he and his colleagues have gained enough confidence to start to change the face of Israel and even its rule of law. His government has passed anti-democratic legislation against NGOs, launched a political attack on the legal system, incited against the media and the left, and declared war on any critic of Israel overseas.
It is putting the legal and political infrastructure for creating an apartheid system in Israel, attacking anyone that might become an obstacle to achieve this goal. In this framework, Israel has recently started preventing human rights activists, critics of Israel and supporters of BDS from entering Israel and the Occupied Territories. In this context, the prime minister, who is under police investigation, suspected of bribery and other crimes, is trying to incite against the left and the media in Israel.
This policy has many supporters in Israel. Israeli democracy is very fragile and is threatened by a lot of ignorance and anti-democratic perceptions. Israelis are taught to think that democracy is the rule of the majority; that the minorities have no rights; and that any criticism of Israel, from inside or outside, is nothing less than treason or anti-Semitism.
A declaration to close down the office of a media outlet with the ultimate excuse that it is supporting terror and violating the security of Israel is perceived in Israel as a patriotic and popular step. The closing down of Al Jazeera is yet another attack on Israeli Palestinians, who are the main viewers of Al Jazeera in Israel and who have been the target of a systematic campaign, led by the government and the prime minister himself. The Israeli Palestinians are the fifth column and Al Jazeera is their flag.
There are commentators who suggested that the move against Al Jazeera in Israel has to be seen in the context of the new so-called coalition of "moderate Sunni states" in the Middle East, led by Saudi Arabia, which Israel is trying to be part of. I do not agree with this explanation. From Tel Aviv, it looks like Kara's initiative has much more to do with the fight against the Boycott, Divestment, Sanctions movement (BDS), against Haaretz, my newspaper, against the social-justice-oriented New Israel Fund and against the NGO Breaking the Silence (created by Israeli veterans) - rather than with the secret relations with Riyadh and Cairo.
If the decision of Minister Kara will not be cancelled or declared illegal by the Supreme Court, it will be clear that Israel is taking an extremely dangerous path. The Israeli journalist association already protested against the intention to close Al Jazeera down. It is now up to all Israeli democrats to tell their government: do not dare to curb free access to any source of information, whether critical of Israel or not!
op augustus 12, 2017 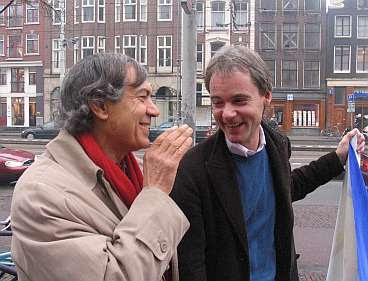