Updated, see below) Iran's Intelligence ministry says it has dismantled an Israeli spy network and arrested the main perpetrators of a murder of Iranian nuclear physics scientist Ali-Mohammadi, a lecturer at the university of Tehran, Press tv reported.
Mohammadi (picture) was killed on 12 July in a remote-controlled bomb attack near his house in northern Tehran. Iran succeeded to arrest the main agents and dismantle a network of Israeli spies, the Iranian Fars news agency quoted the ministry as saying in a statement on Monday.
It added that Israeli intelligence service Mossad has used bases in certain European and non-European countries as well as Iran's neighboring states in an attempt to achieve its goals.
The ministry stressed that months of complicated investigations es and access to sources of the Israeli regime led to the finding of "very important and sensitive" information about Mossad spy teams, which inflicted heavy damage on Israel's information and security structures.
About the killing of Mohammadi also different stories are in the running. Some sources claim that he was a supporter of the Green Protest movement against the falsified reelection of president Ahmadinejad and that he was killed by the regime. It is worth reading Richard Silverstein's blog about this matter and about the news of the arrest of people belonging to an Israeli spy ring. He casts some doubt about this and other Iranian stories.
Fact is however that a kind of secret war is going on between Israel and Iran. Haaretz points to the fact that in February 2009, the British newspaper the Daily Telegraph reported that Israel was assassinating Iranian nuclear scientists as part of a covert war against the Islamic Republic's illicit weapons program.
The Telegraph quoted Western intelligence analysts as saying that Israel's Mossad spy agency was behind the death of Ardeshire Hassanpour, a top nuclear scientist at Iran's Isfahan uranium plant who died mysteriously from "gas poisoning" in 2007.
On 28 November of last year another scientist connected to Iran's nuclear program was killed and a second  wounded in attacks with remote bombs placed on their cars.  It is  believed that the man killed, Majid Shahriari, who was a mathematician, was not so much involved in nuclear matters, but was in fact the top Iranian scientist involved in unravelling the infection of the software of the Natanz enrichment facilities and the Busher reactor with the Stuxnet worm, which most probably has been planted by Israeli agents.

Update: The following was mainly based on false information. On 12 February 2013 Australian tv revealed that prisoner X was in fact a Mossaad spy of Australian decent, who hung himself in Ayalon prison. Look here for more information (end of updarte)
Another matter is the recent death of a high security prisoner, in Israel only named as X., in the Israeli Ayalon prison. He was believed to be Ali-Reza Asgari (picture), a general of the Iranian Revolutionary Guards and former deputy minister of Defence of Iran. Official Israeli sources only said that prisoner X, who's identity  was not even known to the guards of the prison section where he was kept in solitary confinement, had committed suicide. Lateron it was leaked that he probably was murdered. 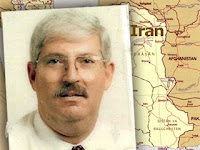 Asgari disappeared in 2006 in Istanbul in Turkey. He was believed to have been kidnapped by Israeli secret agents, although to this day, some maintain that he simply defected and sought asylum in a third country. Fact is however that his relatives never heard anything from him since the time he disappeared. Another fact is that in Israel rumours circulated about a prisoner who had been valuable for his information about Iran's nuclear program, Syria's project of building a nuclear reactor and other strategically important secrets. Again it is worthwhile to read Silverstein's Tikun Olam blog, because he is the man who came up with the most details. Among other things, Silverstein cliamed that the news that X. was in fact Asgari, came from sources in the inner circle of Israel's miniter of Defence, Ehud Barak.
One of the people who lent credibility to the story, was the Iranian minister of Defence, Brigadier General Ahmad Vahidi. After news of the death of prisoner X., possibly being general Asgari, came into the open at the end of December, minister Vahidi said that the dossier on Israel's kidnappings, assassinations and murders would become thicker, if this story was proven to be true.
"This inhumane action is another test for the international community which advocates human rights,' he added. Vahidi said that Iran was certain about Asgari's abduction by Israel's intelligence service, adding that after kidnapping him the Israelis tried to cover up their action and wage a psychological warfare against the Islamic Republic by spreading the rumor that he had sought asylum in a third country.
The Iranian defense minister said Iran would use all its capabilities and capacities to determine Asgari's fate and whether the dead prisoner was indeed Asgari.
Vahidi said that such actions only serve to create public hatred for the US and Britain, which are the main supporters of Israel. He also pointed to the abduction of four Iranian diplomats by Israel in Lebanon in 1982 and said, "Undoubtedly the responsibility and consequences of such shameful crimes fall not only on the Zionist regime [of Israel] but also on their supporters, and they must be answerable for their crimes in the near future."
On July 4, 1982, four Iranian diplomats were kidnapped by militiamen and Israeli forces at an inspection point in northern Lebanon. Israel claims that Ahmad Motevaselian, Seyyed Mohsen Mousavi, Taqi Rastegar Moqaddam and Kazem Akhavan were abducted by the Lebanese Forces group, now headed by Samir Geagea, and were killed shortly after their abduction.

Posted by Abu Pessoptimist at 13:58