Land Day: one killed in Gaza, clashes on West Bank, demonstrations in Jordan and Lebanon 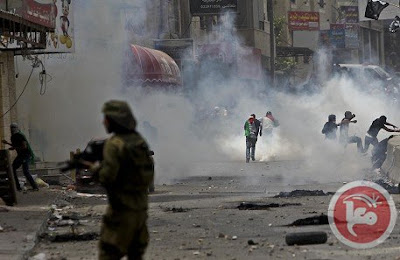 Updated . Israeli fire killed one young Palestinian man and injured over 30 others in clashes at two sites in the Gaza Strip, a Palestinian medical official said Friday evening. Adham Abu Salmiya identified the victim as Mahmoud Zaqout, 20. He was shot and killed near the Erez crossing, the official said.
Thirty-one others in the Erez area were injured and taken to Kamal Adwan Hospital. In Khan Younis, six people were hospitalized. Three people were critically injured, Abu Salmiya added.
Medics said the Israeli army used live fire to prevent protesters from approaching frontier barriers in the small coastal territory. Israeli officials said soldiers fired warning shots to deter the protesters.
Hamas forces had set up checkpoints to prevent protesters reaching the border area, but many of the activists bypassed them, an activist who attended protests in Beit Hanoun said.

Clashes also erupted on Friday in the north of Jerusalem between IDF soldiers and Palestinian protesters marking Land Day. Israeli forces fired tear gas and rubber bullets at protesters across the occupied West Bank on Friday, as Palestinians  marched toward Jerusalem.
In Bethlehem and Qalandiya, near Ramallah, Palestinian youths threw rocks at Israeli soldiers and military installations connected to checkpoints separating West Bank cities from the holy city Jerusalem.  Some 34 people were arrested, Haaretz reported, 15 of them in Issawiya on suspicion of throwing stones, while the remainder were detained in Jerusalem.

The Palestinian Red Crescent treated 339 protesters on Friday at protests around the West Bank to mark Land Day, a spokesman said.Three people in Bethlehem were critically injured, one of whom was hit in the face by a tear gas canister. A protester in Jerusalem was hit in the jaw by a rubber bullet and in Kafr Qaddum, near Qalqiliya, a protester was hit in the pelvis by a tear gas grenade, Ayyad said.
The largest rally took place in Qalandiya, a checkpoint near Ramallah, where 249 were treated for injuries and 20 hospitalized.
Ayyad said Israeli forces injured nine medics and damaged three ambulances at the protest.
A similar confrontations broke out at a checkpoint in Bethlehem, where Ayyad said medics treated 38 people including 11 who were hospitalized.
In Jerusalem, medics treated 35 people, 19 of whom were transferred to hospital. Four people were hospitalized in Iraq Burin, near Nablus and 13 were injured in Kafr Qaddum at simultaneous protests.
In anticipation of the unrest, Defense Minister Ehud Barak had ordered all crossing points into the West Bank closed for a 24-hour period, the Israeli military announced, while additional troops were deployed along the borders with Lebanon, Syria and Gaza. Land Day is a day on which is commemorated that on 30 March 1976 six Palestinians in Galilee were killed by Isareli forces during a demonstration against land expropriations.

In Jordan more than 15,000 people, including opposition Islamists and trade unionists, held a peaceful sit-in near the border with Israel, waving Jordanian and Palestinian flags. The demonstrators carried banners reading: "Freedom for Jerusalem and freedom for Palestine," and "Jerusalem, here we come," as they gathered in Kafrein, some 10 kilometers (six miles) from the border crossing and barely a kilometer and a half (a mile) from the frontier. 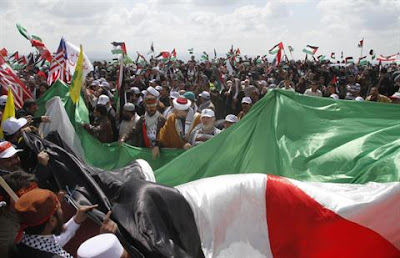 Near the Beaufort Castle in Lebanon.

In Lebanon hundreds arrived Friday at the forer Crusader Beaufort Castle, several kilometers from the Lebanon-Israel border. Authorities were on alert to ensure an incident-free day and prevent a repetition of last May’s clashes between Israeli troops who shot and killed 10 unarmed Palestinians approaching the border to mark Nakba Day.
Security measures included the erection of checkpoints on the main Zahrani-Nabatieh highway and the inner coastal strip leading to south Lebanon. Cars were thoroughly checked and anti-riot troops were seen manning the main street to Arnoun.
Witnesses told The Daily Star that the Lebanese military was also heavily deployed in the border areas of Maroun al-Ras and Bint Jbeil.
Posted by Abu Pessoptimist at 18:18