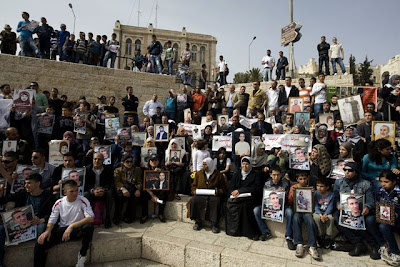 Israel's Supreme Court has rejected an appeal by two Palestinian prisoners on hunger strike in protest at being held without charge. The two prisoners, Bilal Diab, 27, and Thaer Halahleh, 34, have been on hunger strike for the past 70 days. Administrative detainees Bilal Diab, 27, from Jenin, and Thaer Halahla, 33, from Hebron -- are in a precarious condition after refusing food since Feb. 29, a doctor from Physicians for Human Rights-Israel said this week.
Jamil Khatib, the lawyer of Diab and Halahleh, told the AFP news agency on Monday that the Supreme Court refused both appeals against their administrative detention. 'Israeli courts do not handle administrative detention in a positive way,' he said. 'It shows that the intelligence services have the final word. They will continue their strike till the end.'
The human rights organization Addameer added that the Court  in Thaer’s case recommended that since he has already spent nearly two years in administrative detention, the Israeli Security Service should investigate more in depth before extending his detention order to see if there are any possible alternatives to administrative detention. The Court further stated that if his detention order is extended, a more thorough interrogation should occur. The Court reiterated that these recommendations were irrespective of his hunger strike.
In Bilal’s case, the Court also suggested that if his administrative detention order is renewed, and his health permits extended detention, he should also be re-interrogated. The Court recommended that the Security Service shorten his order from 6 months to 3 or 4 months, to allow for a closer date of judicial review.
Activists say that as many as 2,500 out of 4,600 Palestinians held in Israeli prisons are partcipating in the hunger strike. Israel has said the number of participants is 1550. Ten Palestinian prisoners were placed under medical supervision on Saturday as their conditions worsened, a spokeswoman for Israel's prison service previously said. Human Rights Watch on Wednesday called on Israel to 'immediately charge or release people jailed without charge or trial under so-called administrative detention.'

Posted by Abu Pessoptimist at 13:41