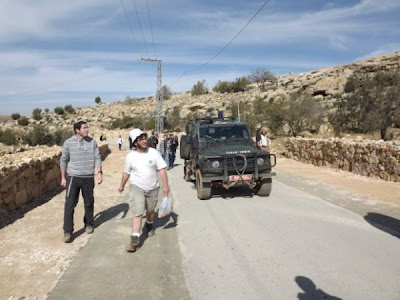 In February of this year the settlers of settlement Havat Maon held a march during which they entered the nearby village of  Tuwani with an escort of the army. The settlers, some of them armed, intimidated the villagers and damaged some of the agricultural lands and trees. The same settlers also regularly harass the children of Tuwani when they walk to school. The Israeli army is therefor  supposed to escort the children. However, regularly the soldiers don't show up in time.

Israeli settlers also cut down olive, almond and grape trees in Palestinian-owned land north of Beit Ummar, a town north of Hebron, on Sunday, a local activist said.
Spokesman of the Popular Committee against the Wall and Settlements, Mohammed Awad, told WAFA that Israeli settlers from the nearby settlement on Bat Ayin attacked the Palestinian land and destroyed fruitful trees belong to Hammad al-Salibi.

Awad said this is the fifth attack targeting al-Salibi's land since the summer. On 12 March of this year
settlers destroyed 150 of his olive trees, and the same month there was also an attack on the 67-year old Salibi himself and on his children.  According to what Awad earlier said, Sunday's attack must be the 11th time Al-Salabi's land was the target of settlers from Bat Ayin. 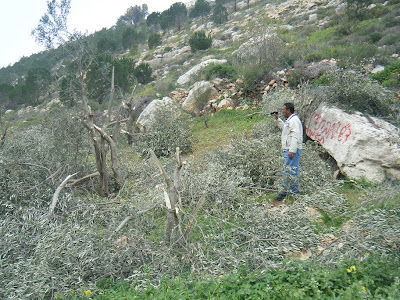 During an earlier attack on farmer Al-Salibi's trees on 12 March 2012, the settlers from Bat Ayin left their signature on a rock. (Click on picture to enlarge it).

Update: A local farmer was attacked by a settler on Sunday while tending to his land in Beit Ummar. Walid Muhammad Salman Sabarneh, 30, was farming his land when a settler approached and ordered him at gunpoint to leave the area, popular committee spokesman Mohammad Awad told Ma'an.  After refusing to leave his land, the settler began to throw rocks at Sabarneh, before assaulting him using the butt of his gun.
Saberneh was taken to hospital in Hebron, Awad said. Israeli soldiers stood by as the incident took place, he added. The settler from Karmi Zur is well known to local residents and has threatened farmers in the area on several occasions.