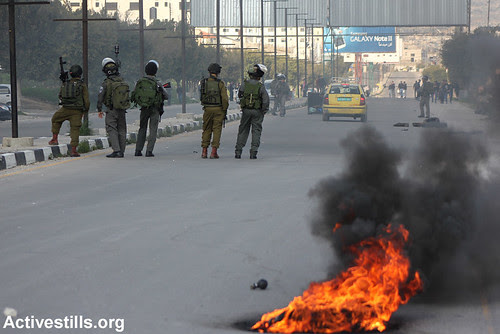 Around 800 prisoners in Israeli jails launched a one day hunger strike on Tuesday to show solidarity with long-term hunger strikers, a prisoner group said. Prisoners in the Israeli jails of Nafha, Ramon and Eshel launched the strike action to put pressure on Israeli prison authorities to deal with the demands of long-term hunger-strikers, the Palestinian Prisoners Society said.
Hamas, Islamic Jihad, the Popular Front for the Liberation of Palestine, and the Democratic Front for the Liberation of Palestine all announced that they would participate in solidarity strike action, the PPS said. On Monday, protesters rallied in Bethlehem, Hebron and Ramallah in support of hunger striking prisoners in Israeli jails, with Palestinian Authority Minister of Prisoner Affairs Issa Qaraqe warning of a popular uprising.
Hundreds of men and women in the southern town of Hebron brandished yellow, red, black-and-white flags of different Palestinian factions. Other demonstrators held up photographs of their loved ones behind bars, some in heavily ornate frames.
In the morning on Monday, 18th February, dozens of activists gathered to deliver a letter to the UN office in Bethlehem and close Street 60 near al-Khader village, southwest of Bethlehem, in a protest in solidarity with the hunger-striking Palestinian prisoners.
Protesters began their demonstration at the UNRWA offices in Bethlehem by staging a demonstration outside of the UN office and presenting a letter addressed to the UN Secretary General Ban Ki-moon calling for action on behalf of the ailing prisoners.The Palestinian activists then went by bus to Street 60, which is used by settlers, to close the street as a show of solidarity with the hunger-striking prisoners in Israeli jails.
op februari 19, 2013