Just a few examples of how justice works in Israel nowadays:

On Sunday June 8th the state prosecution made known that charges will be brought against 12 citizens of Shfaram in the North of Israel over de lynching of a Jewish gunman, Eden Natan-Zada in 2005. Natan-Zada was a IDF-soldier who in August 2005 emptied his M-16 rifle into the bus he was travelling on, killing four passengers before he was beaten to death. Some of the Shfaram citizens will be charged with murder, some others with assaulting police officers and again some others with rioting which led to Natan-Zada's death. De community of Shfaram has called for a general strike on Tuesday in protest. Member of Knesset Mohammed Barakeh (Hadash) called the decision an example of the double standards that are applied against the Jewish and Arab population in Israel. Barakeh: 'Police officers and civilians who stopped Palestinian attackers are rewarded with merits, while Shfaram residents who were only defending themselves are being prosecuted.' 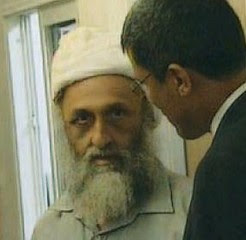 Braude with his lawyer

On Monday the prosecution announced that it drops charges against settler Ze'ev Braude from Kiryat Arba. Braude shot two Palestians at close range in Hebron in December 2008 during the forced evacuation of a house that the settlers had occupied. The incident was filmed by an activist of the human rights group B'tselem. The two Palestinians Hosni Matriya, 44, and his father Abed al-Hai, 67, were wounded in the chest and arm respectively. El-Hai has been operated twice, Hosni is still awaiting surgery. From the statement of the prosecution can be concluded that, although Braude 'started the incident at the house of the plaintiffs', the two Palestinians would have been violent as well when they tried to stop the shooting. 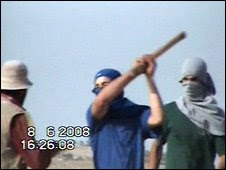 B'tselem communicated on June 7 that police in Hebron closed the ivestigation in a case of severe beating of a Palestinian shepherd, Imran al-Nawaj (32) and his two children south of a settlement on a plot of land belonging to a resident of the nearby Samu' village. This happened in June 2008. The incident, whereby four masked settlers with wooden clubs attacked Nawaj and his family, was filmed by the Palestinian's daughter. Now, one year after it happened, the police claims, however, that 'the offenders are unknown'.

By way of an encore a picture of settler children -tikwatenu, our hope for the future - attacking an elderly woman, while soldiers look on passively. 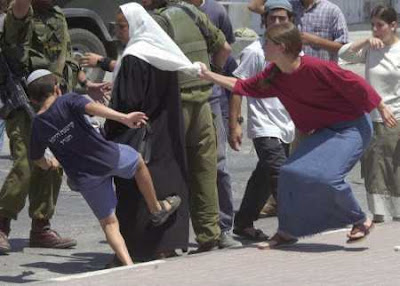