Naomi Klein calls in Bil'in for a boycot 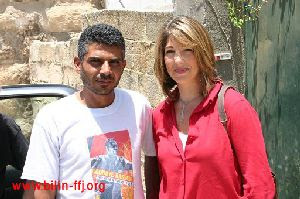 Canadian author Naomi Klein (on the picture with Iyad Burnat of the Bil'ín Village Committee) called for an international boycott of Israel during a visit to the West Bank village of Bil’in on Friday, where she also attended a weekly demonstration against Israel’s separation wall, Ma'an reported. Klein held a news conference in Bil’in on the first of her nine days in the region, where she is promoting her book, the Shock Doctrine: The Rise of Disaster Capitalism.
“We’re rejecting normalization,” Klein said of her Middle East visit, “We’re rejecting the idea that there can be apolitical cocktail parties and book signings while violence like this is taking place so nearby.”
The news conference took place under the shade of an olive tree, in full view of patrolling Israeli forces, the Wall and an Israeli settlement. Afterwards, 200 chanting Palestinian, Israeli and international demonstrators marched on the fence. Israeli soldiers rained tear gas on the marchers and teenagers hurled stones back at the soldiers. Choking on gas, two men had to be helped into an ambulance, and medics administered aid to dozens of protesters. Klein herself watched from a safe distance.
As a part of her push for a boycott, Klein is donating the royalties her the book to her local publisher, Andalus, which specializes in translating Arabic texts into Hebrew. She is also working closely with Palestine’s Boycott National Committee (BNC), and refusing to cooperate with Israeli state institutions during what she called an “unusual book tour.”
“We very much believe that culture is political and that cultural producers should use their skills in order to highlight the resistance to occupation and to strengthen that resistance,” she said, speaking alongside Basel Mansour, a member of Bil’in’s Popular Committee Against the Wall, and attorney Wisam Ahmad of the Palestinian human rights organization Al-Haq.
Klein said she was compelled to join the Boycott, Divestment and Sanctions (BDS) movement during the Israeli attack on Lebanon in 2006. “I’m actually ashamed that it took me as long as it took me,” she said. “It’s a boycott of Israeli institutions. It’s a boycott of the economy,” Klein said. "It’s an extraordinarily important part of Israel’s identity to be able to have the illusion of Western normalcy.When that is threatened, when the rock concerts don’t come, when the symphonies don’t come, when a film you really want to see doesn’t play at the Jerusalem film festival because the people who made the film decided not to come then it starts to threaten the very idea of what the Israeli state is," she also said.
Klein said the boycott campaign is "trying to create a dynamic which was the dynamic that ultimately ended Apartheid in South Africa." She added that while there are aspects of the situation in Palestine that are not as severe as they were under Aparthied in South Africa, "On the other hand, the south African state never bombed Soweto."
Bil’in is near the settlement Modi'in Illit and the Wall. It is losing more than half its land to the wall and the settlement. It is pursuing legal action against two Canadian companies, Green Park International and Green Mount International, for their involvement in the illegal construction of the colonies. A preliminary hearing oon the case began in a Quebec court earlier this week.
op juni 27, 2009