Land of Lieberman and Wilders 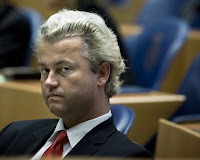 One of the hottest debated items in the Netherlands - the holy cow in the national narrative of our time - is freedom of speech. The one who started it, I think, was Ayaan Hirsi Ali. In her zealous struggle against the Islam of her unhappy youth in Somalia and Kenya she called it an oppressive religion and the prophet Mohamed a tyrant and a pedophile. Instantly she became a hero of the freedom of speech, and got a lot of admirers. Among them was film director Theo van Gogh. He called muslims 'goat fuckers' and made a film with Hirsi Ali of which I, and most others I presume, already have forgotten the title, but which was one of the reasons why he was tragically murdered by a moron of Moroccan descent. That made Van Gogh not only a hero, but a real martyr of the freedom of speech. From then on this freedom was meant to include the right to offend.
After Van Gogh and Hirsi Ali came Geert Wilders with his bleached hair (I used to call him the walking paintbrush). Also Wilders made a film, Fitna, a clumsily scraped together collage of immoderately excited individuals with turbans, smoke from the skyscrapers of 9/11 and other explosions, plus a loose amount of quotes out-of-context from the Koran.
Next thing to do for Wilders was to put the Koran on an equal level with Hitlers Mein Kampf and to request that it be banned - like Hitlers masterpiece before it.
That caused some confusion. On the one hand, it made Wilders likewise a hero of free speech - like Hirsi Ali and Van Gogh before him, but on the other, there are some traditions in Holland and banning books is not one of them. Minister of Culture Plasterk thought he knew a way out from the dilemma: he suggested to abolish the ban on Mein Kampf. All he reaped was a storm of protest. Right now - some months later - the confusion isn't over. A few days ago liberal leader Mark Rutte suggested to do away with the prohibition on denying the holocaust. Also he ran into solid opposition, not least within his own party.

Back to Wilders, champion of the freedom of speech. He's a fan of Israel. In Israel they don't know discussions like we have. Once they had a law there that prohibited contacts with the PLO. Nowadays, with Avigdor Lieberman in the government and a solid ultra-rightist majority in parliament, there are some interesting new proposals going round which are more in line with the Zeitgeist. What would Wilders, champion of the freedom of speech and enemy of Islam, think of them. Do they go in the direction he wants?
To begin with there's a project of law underway in the Knesset which, if adopted, will punish with up to three years jail any person who commemorates the Naqba, the period during which Palestinians were chased away and Palestine became Israel. Israeli's call it Yom Ha'atsmaut (Independence Day). But is it logical to exspect Palestinians to dance in the streets as they commemorate the loss of Palestine and some 500 plus villages that were destroyed?
Or, also a project presently under discussion, a law that put anyone in jail for one year who questions the 'existence of the state of Israel as a Jewish and democratic state'. Nice idea for the one out of five Israeli's who aren't Jewish. Or for people who want to question whether Jewish and democratic aren't in reality incompatible. Or - God forbid - want to discuss the feasibility of a bi-national state. 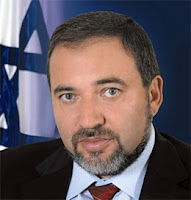 Or what about the law from Lieberman's party, discussed by the Knesset right now, which requests from anybody who applies for Israeli citizenship that he/she declares his (her) loyalty to 'the Jewish, Zionist and Democratic state of Israel'. Or - still also a project - the law which demands that new Knesset-members swear loyalty before assuming office - not like before to the state and it's laws - but to 'the Jewish, Zionist and Democratic State of Israel, it's symbols and values'. Good idea for the Knesset-members of the Arab parties and the non-zionist ultra-orthodox. Israel could as well start to prohibit the Koran. Or the bible. Now, this is really Lieberman-land. Moslims, Arabs, peaceniks, lefties, all that is irregular and different from the mainstream can just shut up. Wouldn't Wilders be happy, over there?
op juni 06, 2009