Independent experts criticize Palmer-report: blockade of Gaza is not legal 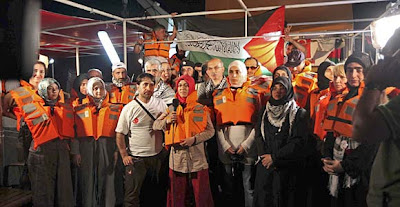 Activists on board the Mavi Marmara, the evening before Israel attacked.

An independent group of five legal experts has severly criticized the so called Palmer report, that said that the Israeli blockade of Gaza was legal. Reporting to the UN-Human Rights Council in Geneva the five said that that the Palmer report did not acknowledge that the blockade is an integral part of Israels closure policy towards Gaza, which is a form of collective punishment that is in 'flagrant contravention of international human rights and humanitarian law.'
The five experts were Special Rapporteur on the right to food, Olivier De Schutter, Special Rapporteur on the right of everyone to the enjoyment of the highest attainable standard of physical and mental health, Anand Grover; Special Rapporteur on the human right to safe drinking water and sanitation, Catarina de Albuquerque; Special Rapporteur on extreme poverty and human rights, María Magdalena Sepúlveda Carmona, and Special Rapporteur on the situation of human rights on Palestinian territories occupied since 1967, Richard Falk.
The five concluded that as a result of more than four years of Israeli blockade, 1.6 million Palestinian women, men and children are deprived of their fundamental human rights and subjected to collective punishment.
Under human rights law and international humanitarian law the people of Gaza, even while living under occupation, have the right to an adequate standard of living, and to the continued improvement of living conditions. This right includes access to affordable and adequate food, and sufficient quantities of safe, accessible and affordable water, as well as proper sanitation services and facilities. But at least two-thirds of Gazan households are food insecure. An evidence has shown that the so-called ‘easing’ of the blockade has not led this to improve,” Olivier De Schutter, the Special Rapporteur on the right to food, said. Approximately 35 per cent of Gaza’s arable land and 85 per cent of its fishing waters are totally or partially inaccessible due to Israeli military measures. The Special Rapporteur called on Israel “to immediately lift restrictions on access to land and sea in order for agricultural- and fishing-dependent livelihoods to rebuild and thrive, reducing aid dependency, and allowing local production of food to increase.”

Special Rapporteur on the human right to safe drinking water and sanitation, Catarina de Albuquerque said that 90-95 per cent of Gaza’s water is polluted and unfit for human consumption, and large quantities of untreated sewage are being released into the environment every day.“Urgent steps are also needed to protect the coastal acquifer, the sole fresh water source in Gaza, from further deterioration. Pollution of the acquifer from raw sewage, over-abstraction of water, and increased salinity are so severe that it may take centuries to reverse the damage caused to this vital source of water,” Ms. De Albuquerque added.
“Glaring gaps in the availability of key medical services have created the need to refer patients with serious medical conditions to hospitals outside Gaza for specialized, life-saving treatment,” reported the Special Rapporteur on the enjoyment of the highest attainable standard of physical and mental health, Anand Grover. Despite a slight increase in the average rate of approval for patient referrals outside Gaza in the second half of 2010, one out of five patients still missed hospital appointments because their permits were denied or delayed. “These patients must be guaranteed access to health facilities, goods and services,” underscored Mr. Grover, stating that the Government of Israel’s obligation to respect the right to health means that it must not deny or limit equal access to health services.
According to the Special Rapporteur on extreme poverty and human rights, Magdalena Sepulveda, the Israeli blockade is the primary cause of the poverty and deprivation experienced by the people of Gaza. “In order for Gazans to have access to the economic opportunities necessary to pull themselves out of poverty”, Ms. Sepulveda stated, “all Gaza entry points must be opened to facilitate freedom of movement for individuals, the unhindered inflow of investment and industrial and agricultural inputs, and the export of products from Gaza.” The International Court of Justice, United Nations human rights treaty bodies and special procedures, and successive High Commissioners for Human Rights have consistently confirmed that international human rights law and international humanitarian law apply concurrently in all of the West Bank and the Gaza Strip.
Mr. Richard Falk, Special rapporteur on the situation of human rights in the occupied Palestinian territory, stressed that “The Palmer report was aimed at political reconciliation between Israel and Turkey. It is unfortunate that in the report politics should trump the law.” Mr. Falk continued, “the most questionable move of the Palmer Panel was to separate the naval blockade from the overall closure of Gaza to a normal supply of humanitarian supplies, including supplies needed for medical operations and sanitation. The flotilla incident was about the effort to circumvent this aspect of Israeli policies, and the organizers doid not object to inspection carried out to prevent weapons from entering Gaza.
The blockade of Gaza continues to violate international law, the experts concluded, recalling that this conclusion had been reached by the international fact-finding mission appointed by the Human Rights Council to inquire into the 31 May 2010 flotilla incident in its report of September 2010. “It is unacceptable that the human rights of the people of Gaza are disregarded because of the positions adopted by political leaders”, the experts said. “It is not the Hamas Government that is being punished, but ordinary Gazans.”
Posted by Abu Pessoptimist at 10:24