...American-style attempts to impose order on the Middle East have not generally turned out well. Yet for once, something seems to be making sense in the Palestinian territories, thanks largely to Fayyad. Crime and lawlessness have been cut significantly in hot zones like Nablus and Jenin, and Hamas has become nearly invisible in the West Bank.

Salam Fayyad, the non-elected prime minister of the Westbank revealed his plan for a state in two years. And see, the West likes it. EU-representative Tony Blair lately called him 'absolutely first class'. The all-knowing Tom 'yes-I-got-the-Pullitzer Prize-for-it' Friedman of the New York Times*) praised his style of government in a column and suggested that 'Fayyadism' might be an example for other potentats in the Middle East. The IMF was happy and projected a 7% growth for the Westbank if it is continuing on this track. And Fayyad got his interview in Newsweek, but ...

...He is not, after all, a democratically elected prime minister. The last time Palestinians went to the polls, in January 2006, Fayyad's constituents gave his party a dismal 2.4 percent of the vote.......It was only in the midst of a national crisis, after the Hamas takeover of Gaza in June 2007, that President Mahmoud Abbas elevated him to power in the West Bank by emergency fiat. "There was no way it was going to be democratic," Fayyad explained.

No, there wasn't. So...
...The prime minister has imposed the order he so values by helping to engineer a series of brutal crackdowns. In the past two years, PA troops have arrested some 8,000 Palestinians in the West Bank; nearly 700 are still in prison. Former inmates tell of beatings and torture. If prisoners see the inside of a courtroom, it is often presided over by a military judge. Critics contend that the arrests are largely political, aimed at West Bank Islamists. "The pendulum has swung from a state of lawlessness to a police state," said one Palestinian-rights advocate, who didn't want to be identified in order to stay on Fayyad's good side. The security sweeps also threaten to undermine any potential reconciliation between the West Bank and Hamas-controlled Gaza, which many observers believe is a prerequisite to any peace deal. 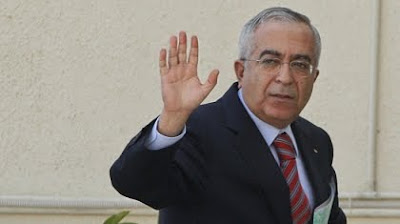 Another of the things that does not exactly increase his popularity, is that he is perceived as America's man on the spot, but
..."We're not a police state, with all due respect," he said. "I understand the substance [of the criticism]—that the pendulum has swung too far. But it had to happen. This country was going to go down the tubes unless something decisive happened."

No police state, but sometimes the police does get a free hand, however..
...Fayyad's men had pursued the Hamas militants to their safe house, where they had barricaded themselves inside. "One of two outcomes is acceptable," the prime minister remembers telling his national-security chief. "Either these guys leave with their hands over their heads, or what has to happen has to happen." At 6:15 a.m. an officer called Fayyad and reported: "It's almost done." As the sun was rising, PA troops stormed the house, killing all the militants inside. Security experts I spoke with after the raid, including a senior intelligence officer loyal to Fayyad, were uniformly critical. They insisted that the PA forces should have given the militants more time to surrender before storming the house. When I asked Fayyad about it, he shrugged and said that he thought the operation sent a clear message. "This is for real," he said quietly. "No apologies."

What has to happen, has to happen. Is this Fayyadism? It certainly is something that must make general Dayton and Mohamed Dahlan quite happy.

*) In the fall of 1982, after Israels invasion of Lebanon of that year, I met Tom Friedman in Beirut, where he was the Beirut bureau chief for the NYT at the time and whom I had met before in Iraq. I complimented him with his coverage of the war and called it 'good stuff'. 'Oh, yes, thanks,' he said, 'I got the Pullitzer Prize for it. Didn't you know?'
Posted by Abu Pessoptimist at 11:53