'He barely said a word and they shot him' 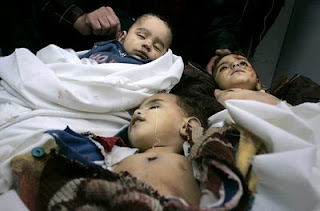 .....They came straight into the living room; we were in the children's room, across the way. [The soldiers] looked frightening. Their faces were blackened with charcoal and they had big helmets with branches in them. We were so afraid we shouted."
Mahmoud Samouni, 12: "They were from Givati" - an infantry battalion.
Zeinat Samouni: "We all shouted. Atiyeh stood up to approach the soldiers and talk to them. He knows Hebrew. Ahmed followed him, crying: Daddy, Daddy. Atiyeh told him, Don't be afraid.

"My husband walked toward the soldiers with his hands up. 'Here I am, Khawaja [term for a non-Muslim]. He barely said a word and they shot him. It wasn't just one who fired. Atiyeh was at the door of the children's room, [the soldiers] were maybe a meter away. They kept shooting into the room where we were. Ahmed was hit in the head and the chest, Zahwa in the back. Her sons Faraj and Qanan were also hurt, and my Abdallah [10] was hit in the head and the hip, also Amal [his twin sister].

"We all lay down on the floor. After maybe a quarter of an hour I shouted to the soldiers, 'Ktanim, Khawajam, ktanim' ["little ones," in Hebrew], and they stopped shooting. I saw one soldier spit twice on my husband. Then they came into the children's room and in my bedroom they began destroying the furniture and threw something [probably a stun grenade], so the room filled up with smoke and a fire started and everything in the room - clothes, documents, money - was lost......