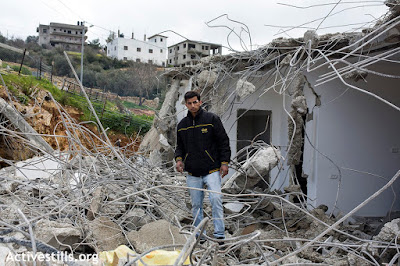 Majdi Sweiki in front of his demolished house in al-Walaja (Photo Activestills.org)

Israeli forces demolished on Monday a house in the village of al-Walaja, to the north of the southern Biblical city of Bethlehem in the occupied West Bank , local sources said. Ibrahim Awadallah, an activist, told WAFA that Israeli forces raided the village and demolished a 100-square meter home owned by Majdi Shweiki under the pretext that it was built without a permit. Five members of the Shweiki family were displaced as a result, he said.

Awadallah noted that there are 180 homes in the village that have received demolition notices, 40 of which demolition orders have already been issued against them, all under the pretext of building without permit.Israel has annexed most of the village in recent years, but not its residents, in order to incorporate it into Jerusalem where it intends to build a settlement after emptying it of its Palestinian residents.
Also on Monday Israeli forces cut down and uprooted hundreds of Palestinian-owned olive trees in Jordan Valley in the northern occupied West Bank.Mutaz
Bisharat, a Palestinian official who monitors settlement activity in the Jordan Valley/Tubas district, told Ma'an that the Israeli Civil Administration staff raided the Bardala village in the northern Jordan Valley and bulldozers began to uproot olive trees.Bisharat confirmed that more than 520 olive trees were either cut down or uprooted. He added that the olive trees were about 15 years old. Bisharat also mentioned that the olive trees belonged to five Palestinian residents. About 250 trees belonged to Muhammad Salah Yousef Sawafta, 160 trees belonged to Amer Sawafta, 70 trees belonged to Amer Ehmil, 40 trees belonged to Izzat al-Rashayda, and four dunams (0.98 acres) of chickpea harvest belonged to Ziyad Sawafta. The Jordan Valley forms a third of the occupied West Bank, with 88% of its land classified as Area C -- under full Israeli military control.
Israeli forces raided the water pump rooms in the village of at-Tiwani, east of Masafer Yatta,  south of the southern West Bank district of Hebron, said a local official.
Head of at-Tiwani village council, Mohammed Rabe’ told WAFA Israeli forces, accompanied by staff from the Israeli civil administration, raided the water pump rooms in the village, and conducted search operations for the water pipelines feeding the eastern part of Masafer Yatta with water, in an apparent prelude to cut off water supply to residents.
The popular committee coordinator in Yatta, Rateb al-Jabour, told WAFA this Israeli authorities' measure aims at forcing the residents, shepherds, and farmers, to leave the area in order to take over the land for the benefit of settlement expansion.
Israeli forces also destroyed a recently-rehabilitated road that connected Khirbet Shaab al-Butum to Masafer Yatta, in the south of the West Bank, said a local activist. 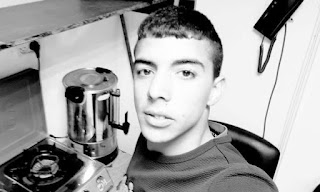