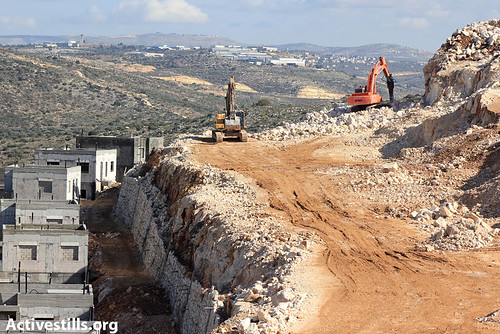 Business as usual during tjhe pope's visit. Christian media paid a lot of attention to the destruction of 1.500 fruit trees belonging tot the Nassar family near Bethlehem on their project ''The Tent of Nations''but the settlement's machinery continued its work elsewhere as well. Israel bulldozers leveled Palestinian land in the central West Bank on Sunday, while soldiers issued notices to residents announcing the confiscation of their lands, a local popular committee member said.
Jamal Tawfiq told Ma'an that as Israeli forces leveled lands in the Thahr Sabha area of Kafr al-Dik village in the Salfit district, locals were informed that some 3,000 dunams (750 acres) of Palestinian land were slated for confiscation. Israeli authorities -- who claimed to have received a court decision on the matter -- will confiscate privately owned land from the villages of Kafr al-Dik, Sarta, Bidya, and Broqin, Tawfiq said. He told Ma'an the land slated for confiscation was declared a closed military zone.
A spokesman for Israel's Civil Administration did not answer calls seeking comment.
op mei 26, 2014