Houses in Jabal al-Baba with Ma'aleh Adumim in the background. (Mya Guarnieri/+972)

Israeli forces and civil administration officers issued demolition and eviction orders to 40 Palestinian families in East Jerusalem late Sunday.
A spokesperson of the Popular Resistance Committees, Hani Halabiya, said that the occupation authorities distributed the evacuation orders ahead of demolishing all the houses owned by the Bedouin families in Al-Baba Mountain, who have been living there since 1967.
Halabiya noted that the ultimatum given to the families is to evacuate their homes in less than ten days. Furthermore, the order also includes evacuating barns full of hundreds of domesticated animals that help to sustain the livelihood of the Bedouin families.

The area of the neighbourhood is approximately 1,000 dunams and contains dozens of small houses for about 350 Bedouin residents, as well as a kindergarten. All the residents will become homeless.
The 40 Bedouin families of this neighbourhood belong to Al-Jahalin tribe, which was evicted from the Negev by Israeli forces in the 1950s, and displaced again after the 1967 war to finally settle in the Al-Baba Mountain region. The Israeli occupation aims to demolish the neighbourhood ahead of land confiscation plans, in preparation for the expansion of the Israeli settlement of Maale Adumim and to extend the separation wall, according to Turkey's Anadolu Agency.
The Jabal al-Baba area is situated in what Israel calls the "E1'' region, an area between Ma'ale Adumim and Jerusalem. Israel plans since several years to build a neighbourhood here that will connect Ma'ale Adumim with Jerusalem and that will cut the West Bank effectively in two. Till now the plans have been postponed under American pressure.

Another picture of houses in Jabal al-Baba.
op februari 24, 2014 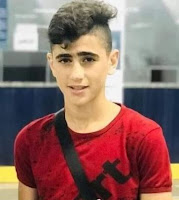