Anniversary of a revolution that did not materialize

Shaimaa's funeral.The banner reads: Remember 26 January; we claim a revolution that did not materialize.

This Sunday 25 January was the fourth anniversary of the Egyptian uprising against Hosni Mubarak and his regime, that gave way to a short lived hope and ended in tragedy. Nothing symbolized that more eloquently than the fact that Tahrir Square, the ''place where it all happened in 2011'' was closed off by security forces. Even small groups of people who wanted to parade in favour of president Abdel Fatah el-Sisi, were politely asked to go away.
Ín Ma'adi and 6 October City, two places at the periphery of Cairo, small demonstrations were dispersed with teargas. In two popular districts of Cairo fierce fights took place between supporters of former president Morsi and the police, and in downtown Cairo a gathering at the Journalists' Syndicate was disturbed by people who carried portraits of president Abdel Fattah el-Sisi and started to pelt the journalists with stones.
A spokesman of the April 6 Youth Movement, one of the main organisations behind the original uprising of 2011 (in was the one that in fact orchestrated the demonstrations), said that five members of the movement were arrested. That happened after a spokesperson of the movement told the pivate Al-Shorouk newspaper that the movement was planning to commemorate the revolution with marches.
The commemoration, however, started on Saturday with the murder of  Shaimaa Sabagh, prominent member of the Socialist Popular Alliance Party and mother of a five year old son. Shaimaa was shot by the security forces while marching with some 30 members of her party from the headquarters of the party in Hoda el-Shaarawy street to Tahrir (some 500 meters) in order to lay a wrath for fallen martyrs of the revolution. She was shot in the back by birdshot that, as the autopsy revealed, punctuated her lungs and heart. (The authorities denied that the shot had come form the security forces, which wasn't the first lie of this kind). The photo on top of this post is taken at her funeral in Alexandria. 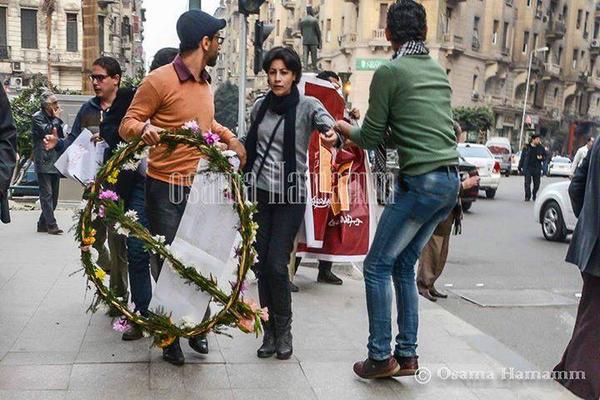 Shaimaa el-Sabbagh, just before and just after she got shot. 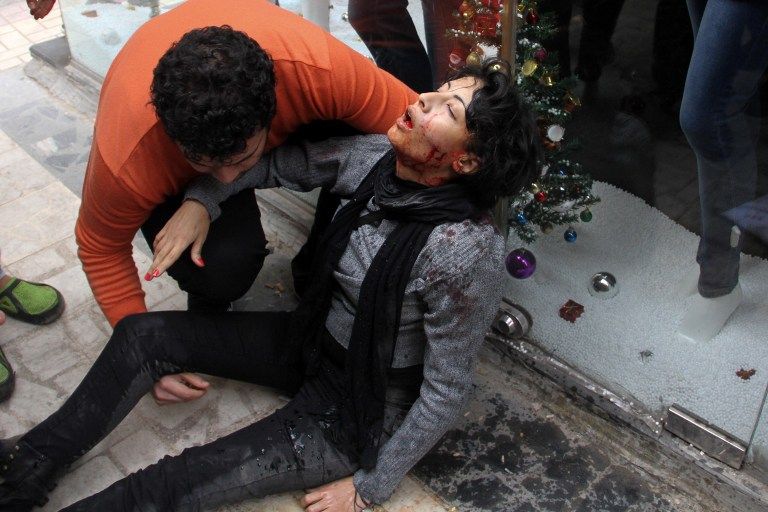 Shaima was not the only victim of this anniversary. Egypt's Health Ministry announced that there were 16 deaths, 14 of which occurred in clashes between protesters and police in the Cairo districts Matareya and Pyramids (Haram) and the city of Alexandria. Some 38 people were injured, including five police officers, according to the ministry.Apart from that dozens were arrested, many of whom were supporters of the Muslim Brotherhood, according to state-owned Al-Ahram newspaper.
Muslim Brotherhood affiliated social media accounts posted pictures of bloody-faced protesters, asserting that the casualties were peaceful demonstrators attacked by police forces.The Interior Ministry announced the killing of an armed man in Alexandria earlier on Sunday, who they claimed was one of two civilians using automatic weapons to shoot randomly at protesters.The Middle East News Agency (MENA) reported the death of two people who they said were attempting to install bombs at an electricity tower in Beheira.
Amongst the fiercest violence in Cairo on Sunday were those around the northern district of Matareya. This working-class neighborhood witnessed ongoing clashes between opposition forces and supporters of ousted President Mohamed Morsi and police and civilian supporters of President Sisi.
The death toll and number of arrests in Matareya are reported to be amongst the highest in Cairo. By around 5pm, hundreds of protesters are reported to have pushed riot police troops out of Matareya Square. Clashes centered around Taawon Street leading up to the square. Photos and videos reveal rock-strewn streets, and troops firing teargas at protesters from armored personnel carriers.
Private media outlets Al-Shorouk, Al-Masry Al-Youm, Veto, and Al-Mogaz reported that Morsi supporters set fire to tires in the square after pushing Central Security Forces back to the nearby Matareya Police Station and sealing off the streets surrounding the square. Protesters could be heard chanting slogans against Sisi, the police and the Armed Forces.
op januari 25, 2015 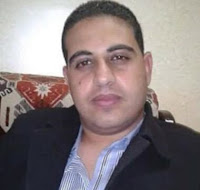