Inside the Tahrir boat to Gaza Friday morning, as everyone sat opposite computer screens, updating the world about our trip, David Heap, one of the boat's organizers, made a grand entrance to our make-shift media center.
“50! We're 50 miles away from Gaza,” he screamed to applause.
The previous night, we were expecting Israeli intervention at any point. Israel has a record of attacking solidarity boats in international waters as far as 100 nautical miles off Gaza’s shore. But when we woke up to a sunny day and found that our communications system was working, we thought that arrival to Gaza was imminent. Activists on board spent the first half of the day decorating the boat with pro-Gaza flags, signs and artwork.
The enthusiasm, however, didn't eliminate our expectation of Israeli intervention. Activists were working on English and Hebrew signs reading “this is piracy” and “this is kidnapping,” in anticipation of a possible attack in international waters.

We were right to temper our optimism.Towards the early afternoon, we saw three Israeli warships in the horizon. We knew that the moment had come.
At that point, some activists and journalists on board started throwing equipment into the sea, fearing that the information stored on their technology could be used by our potential captors to implicate other activists who were not on the boat.
Soon after, the Israeli presence in the waters around us intensified. We counted at least 15 ships, four of which were warships, and the rest a mix of smaller boats and water cannons. From inside the smaller boats, dozens of Israeli soldiers pointed their machines guns at us. This is when our communications system was jammed and we lost contact with the world.
Our boat's captain started receiving radio messages from the Israeli navy, asking about the organizers and the destination of the trip. Ehab Lotayef, another organizer of the Tahrir boat to Gaza, communicated with the Israeli navy, telling them that our destination was Gaza and that any attempt to arrest us would be illegal. When the navy repeated over the radio, “Tahrir, what is your final destination?” Lotayef, who is a poet, responded, “the betterment of mankind.”

As Israeli naval vessels loomed around our boat, the Israelis made a proposition that they would send one person to inspect for weapons, and if he found nothing, they would let us pass. The proposition was met with skepticism among the activists, although some thought this could really be a way to get to Gaza. The Irish boat, which was sailing with us, staunchly refused the proposition.
As the Israeli ships closed in on us, we found the Irish boat heading into our direction and hitting our boat so aggressively that they damaged their entry point. We speculated that this could be a form of resistance to the forced Israeli boarding, but we couldn't communicate with them to find out.
At this point, the Israelis had withdrawn their proposition and sent radio messages to our boat, asking us to stop sailing because they would board the boat and take us to the Israeli port of Ashdod. When our boat refused to surrender, they aimed their canons at us, showering us with salty water. This came a few minutes after Heap had warned us, “get ready for a shower.” The radio warnings from the Israeli navy continued, asking the boat's members to remove the net surrounding the boat, which we had put in place as a form of protection. 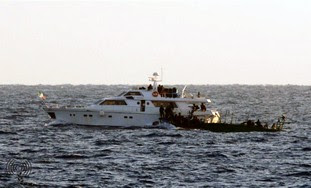 The boat had become highly unstable and panic was in the air. But a beautiful rainbow in the sky caught our attention, and, in what was a surreal moment, we started capturing it with our cameras.
Then we were outmaneuvered. Israeli ships hit our boat and soldiers started boarding. Dozens of masked soldiers screamed “on your knees,” and “hands up.” One soldier filmed the whole process. At the same time, a group of soldiers invaded the boat’s lower level, where we had set up our media center.
After some initial checks, we also found ourselves below deck, where we were seated one next to the other. We learned that the boat was already being steered towards Ashdod. When one of the soldiers asked if we needed anything, Lotayef and Heap said “we need our boat back.” They were ignored.
We were then allowed to go one by one to collect our luggage from the ship’s hold. I found no computers or any other electronics left, and our luggage was dumped in piles, with soldiers lying on the floor in what became a mess. That same area had been our temporary home for the past four days as we worked, ate and slept there. The scene of a dismantled home was quite disturbing.
After two hours we reached Ashdod. Unfortunately, I couldn't see what became of the other passengers because I was called out first. We exchanged painful gazes at each other as I was taken out, wondering when and where next we would meet next.
On the way out of the boat, I was showered with flashes as Israeli soldiers took pictures. The place we were taken to at Ashdod is a featureless detention facility for “illegal migrants." I was strip-searched and had my flip cam, personal diary, USB stick, mobile phone and voice recorder confiscated. My computer and camera had already been taken by the soldiers on the boat. I tried to negotiate to get my things back - or at least to recuperate my personal diary, where I had compiled minute details of the trip - but failed. I did manage to keep two books they wanted to confiscate.
My thoughts, in the meantime, were with the boat's activists, who pledged to peacefully resist being taken out of the boat. They agreed that they would only leave the boat by being forcibly dragged. As I was searched, I heard Heap screaming inside the facility. “Ehab, can you hear me?,” “Majd, can you hear me?,” “Kit, can you hear me?,” “Karen, can you hear me?,” “Michael, can you hear me?” His calls echoed in the large detention facility, piercing through its noisy corridors. But I heard no responses from fellow activists.
I was brought somewhere else, where I was interrogated by police officers for 30 minutes and where my finger prints and photo were taken. During the interrogation, I was asked about my professional history, the different organizations I worked for and how I knew Freedom Waves, our flotilla to Gaza, and the activists involved. As I was facing the police officer, I saw the reflection of George Klontzas, the boat's captain, in the mirror. His legs were cloaked in metal chain.
“Are you aware that you were heading into a closed military zone?” the police officer asked. I said yes. When he asked why I did that, I told him I was covering an activists' quest to challenge the Gaza blockade. He smiled and let me go.
I was driven by two diplomats from the Egyptian Embassy to the Taba border crossing and crossed over to Egypt, quite smoothly and unharmed.
***
Right before setting sail, I was sitting with Heap in an office at the Fethiye port in Turkey, sending last minute emails. Amid frantic emailing, I overheard Heap calling his son on Skype and telling him, “I love you, you know that.” I was a little disconcerted. I hadn’t thought to do the same. I asked him, “Do you really think we need to call our folks and tell them we love them before we sail?” He told me, “We have to tell them we love them all the time.” At the time of writing this article, he and Lotayef were still detained in Israel.
One of the two books that escaped confiscation was Mediterranean Crossings by Iain Chambers. As the soldier removed my bookmark, I naively rushed to mark the page by folding it. “The Mediterranean becomes a site for an experiment to a different form of history,” read some of Chambers’ words on that page. Perhaps the line describes the act of appropriating international waters in a quest to change the status quo.

[RAMALLAH] Of the 27 human rights defenders captured during Israel’s illegal takeover of the Freedom Waves to Gaza vessels on Friday, 4 November, 20 remain in Givon prison and the whereabouts of one is unknown.

The whereabouts of British journalist, Hassan Ghani of PressTV is unknown. On Saturday prison authorities told lawyers that Hassan was not at the prison, yet we know that he has not yet been released. Freedom Waves organizers demand that the Israeli authorities reveal where Hassan Ghani is being held and that he be allowed access to a lawyer.

The Israeli authorities have tried to pressure the human rights defenders that remain in Israeli prison to sign a voluntary deportation agreement (waiver of right to see a judge) in order to be immediately deported. The activists refuse to sign, not because they want to come before an Israeli judge, but rather because the wavier states that they came to Israel voluntarily and entered the country illegally, which are patently untrue in light of the fact that Israeli naval ships violently seized the Tahrir and Saoirse, and forcibly transported them and all on board to Ashdod. Israeli authorities have ignored requests by the group’s lawyer to deport the activists immediately without having to sign this form that contains falsities meant to absolve Israel of responsibility for illegal abduction of foreign nationals in international waters.

Because they have refused to sign the waiver, according to Israeli law, they will be detained for 72 hours and then brought before an immigration judge, who will rubberstamp the deportation order. After this mock legal process, deportation will commence. For the first 24 hours of their abduction, none of the activists, crew, or journalists, were allowed to call a lawyer or family members. On Sunday, a few were able to make one one-minute phone call.

NOTE: Various accounts from prisoners have come out contradicting Israel's claim of a peaceful takeover of the boats. Some activists were tasered and beaten, and at least one of the captains abused during interrogation. For accounts that we have been able to obtain, please see: www.tahrir.ca and www.irishtogaza.org